Skip to content
What is a 360 performance review? Can it be done in Salesforce?

What is a 360 performance review? Can it be done in Salesforce?

A 360 review is a type of employee performance review that allows all employees and managers to provide feedback about a colleague’s performance. Unlike a typical employee performance review in which an employee’s work performance is evaluated only by their manager, a 360 review includes feedback from peers and subordinates, and in some cases even customers and other people who interact with the employee. Normally, this was only possible using 3rd party applications, but did you know that you can now do it all in Salesforce?

With Axy Employee Management, 360 reviews can be performed easier than ever before. 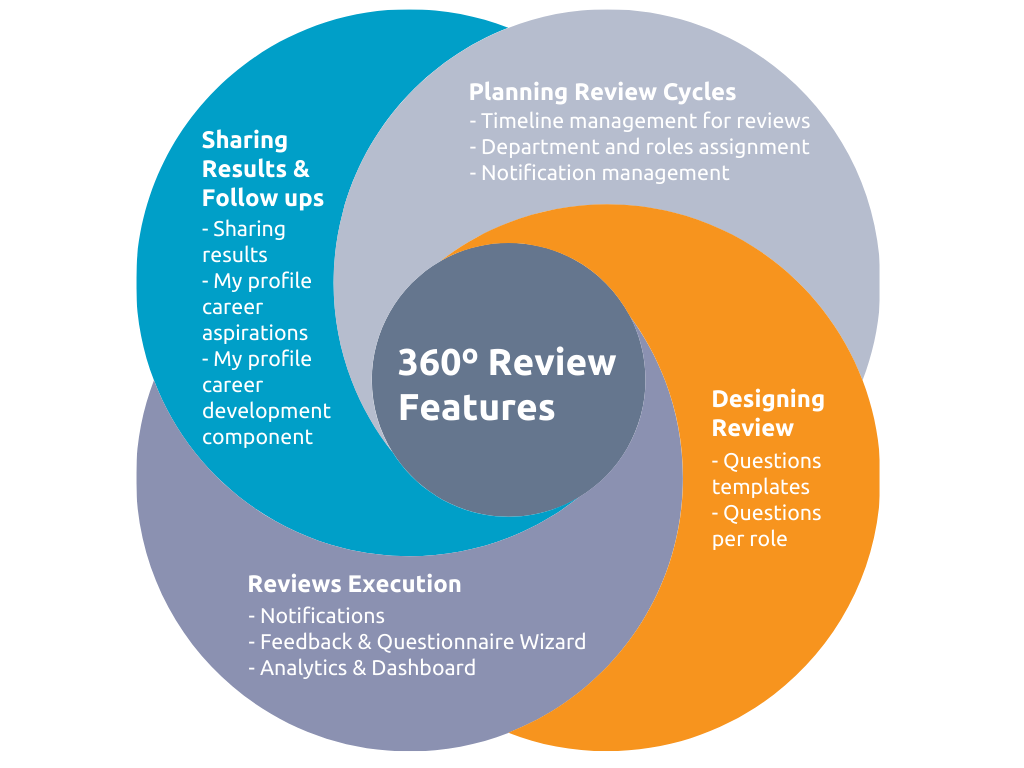 360 reviews have been around for a while, however, HR departments still find them challenging. Some of the challenges include setting clear dates for the process, involving the right stakeholders, creating a logical questionnaire that doesn’t end up being yet another survey that employees ignore, and ensuring that the 360 review results in strategic decision making that increases both the performance of the entire company as well as individually.

With Axy Employee Management, setting up a 360 review is really simple. You can:

Create customized questions that can have different types of answers like checkboxes and picklists, and most importantly group them in questionnaires that you can easily assign to the roles that have to answer them. 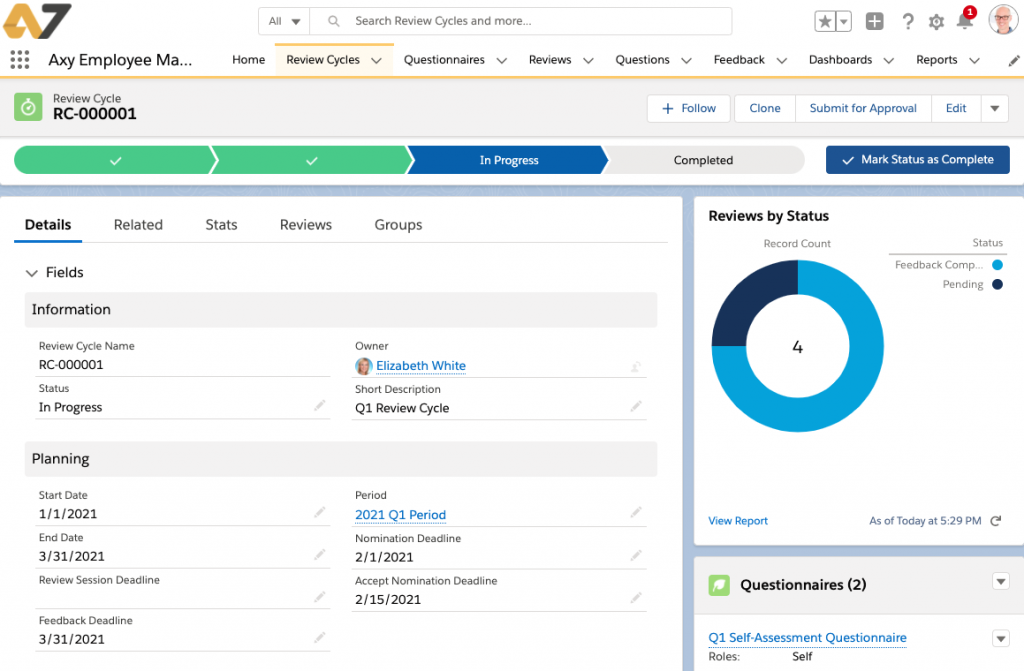 So how does a 360 review work? In a 360 review, feedback about an employee’s performance, skills, and contributions is requested from their peers, subordinates, and manager, and then shared with the employee. A typical mistake in 360 reviews is to focus on whether the work was accomplished rather than on how the employee affected the work of other employees.

This is where Axy Employee Management is extremely useful as it leverages the power of Axy OKR to present objectives and up to date, relevant information about how the employee contributes to the achievement of the company’s goal during a determined period with their own OKRs. It is flexible enough to include both questions about the employee’s fit within the company culture as well as their own professional career development plan. (To learn more about career plans with OKRs, check out this post).

Not all employees are familiar with 360 reviews. One of the most common concerns people have with them is confidentiality during the entire process. Axy Employee Management takes care of this issue. Firstly, the participants in a review are only allowed to see the questions assigned to them which means that the employee won’t be able to see who is evaluating them and the evaluator won’t be able to see what the others are saying about the employee, removing the possibility of any biased answers. Additionally, a manager notes field has been created where the HR department and management can exchange notes confidentially if needed during the review.

This website uses cookies to improve your experience while you navigate through the website. Out of these, the cookies that are categorized as necessary are stored on your browser as they are essential for the working of basic functionalities of the website. We also use third-party cookies that help us analyze and understand how you use this website. These cookies will be stored in your browser only with your consent. You also have the option to opt-out of these cookies. But opting out of some of these cookies may affect your browsing experience.
Necessary Always Enabled
Necessary cookies are absolutely essential for the website to function properly. This category only includes cookies that ensures basic functionalities and security features of the website. These cookies do not store any personal information.
Non-necessary
Any cookies that may not be particularly necessary for the website to function and is used specifically to collect user personal data via analytics, ads, other embedded contents are termed as non-necessary cookies. It is mandatory to procure user consent prior to running these cookies on your website.
SAVE & ACCEPT